How do you create the spark that elevates a perfectly decent team to a truly high performing team? How does a team create a dynamic that allows everyone to consistently show up and ship their very best work? And how do you create conditions so fulfilling that your employees won’t want to leave the team?

If these are the sort of questions that keep you awake far beyond a reasonable bedtime, I’m going to answer them by taking you on a trip back to Japan of the 1980s and a story shared on the This American Life podcast.

By the early ‘80s, Toyota had become increasingly famous for its lean production system — a system that allowed the company to reduce costs while increasing productivity and create a high performing (and happy) workforce, thus securing its reputation as a world leader in automotive manufacturing.

At this time, GM workers were not a happy bunch. There was an adversarial dynamic between managers and production line employees, resulting in high levels of employee turnover, frequent absenteeism, and even minor acts of sabotage during the manufacturing process. The company was struggling to keep up with consumer demand for high-quality, fuel-efficient cars and consumers began to invest instead in overseas brands.

So GM decided to partner with Toyota.

Together, they teamed up and created New United Motor Manufacturing, Inc (NUMMI), a production plant that would manufacture cars sold under both brands.

Adopting the systems and processes used by Toyota factories in Japan, the NUMMI plant created a high performing team that was so successful in producing high-quality vehicles at speed, GM decided to try to replicate its success in its other production plants.

GM implemented the production system with detail and precision at several of its other plants. However, while they replicated all of the steps, they were unable to replicate the results of the NUMMI plant. Something was missing.

It’s like baking chocolate chip cookies. You spread your ingredients out on the counter: you have flour, butter, sugar, and the all-important chocolate chips. It looks like you have everything you need — only you’ve forgotten the baking soda and when the cookies emerge from the oven, they’re not quite right. They’re flat, uninspiring, and the texture is all wrong.

Because they were missing that active ingredient.

And it was the same thing with the GM plants: on paper they were doing everything right, they had a decent-looking recipe. But they didn’t hit the mark because they were missing a vital active ingredient. It took the company leaders too long to identify the missing active ingredient. And by the time they did, it was too late.

While Toyota and NUMMI boasted a wealth of systems and concepts that created the perfect conditions for high performing teams to thrive, there was one factor, in particular, that was the spark to their outcomes: trust. 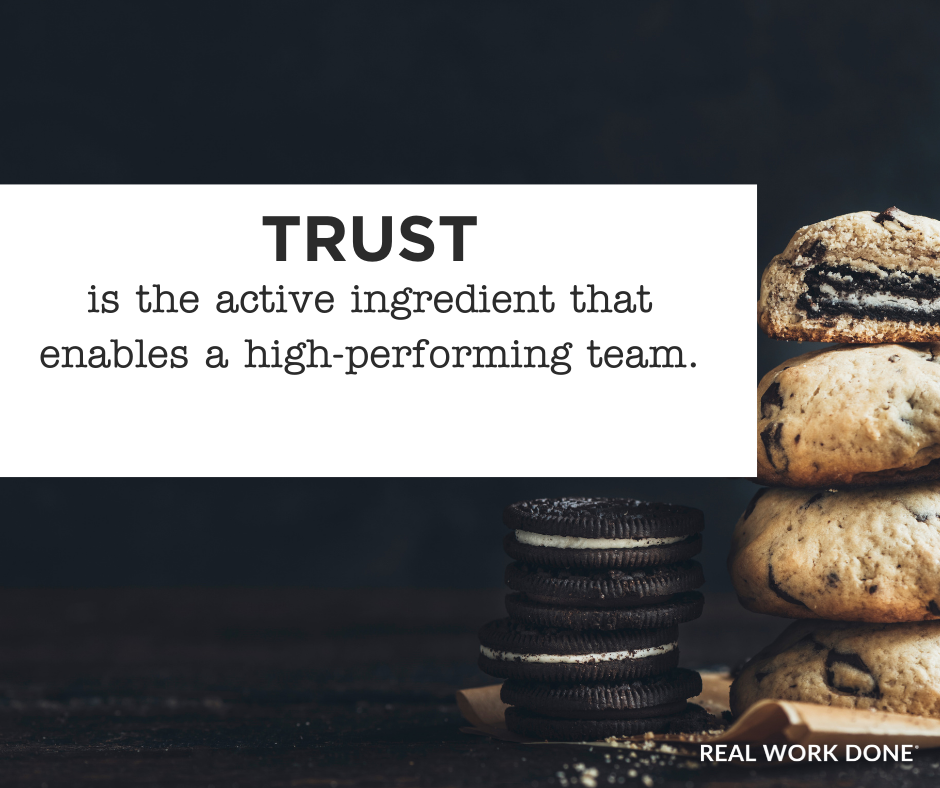 The Stop and Fix mantra.

Under the stop and fix remit issued by supervisors at Toyota and NUMMI factories, every single production line employee was empowered to stop the line if they saw a problem occur. Even if it was a tiny, seemingly insignificant problem. Even if it meant stopping production for an entire day.

Supervisors understood that it was far less expensive to address quality issues sooner rather than later. But the real benefit was the culture of trust that the stop and fix philosophy engendered in the plants’ employees.

In short, it helped create a strong culture of psychological safety, a culture in which people had the agency to make difficult decisions and the confidence to speak up when they could see ways of improving the quality or efficiency of their work.

(Sidebar: psychological safety matters more than you realize. Here’s why.)

The benefits of cultivating a culture of trust in your organization.

When you work towards creating a high trust environment, there are numerous benefits, two in particular that were proven out by the NUMMI/GM experiment.

Giving NUMMI employees the agency to speak up when they encountered problems, the trust to undertake their own troubleshooting, and the support they needed to improve outcomes, they felt both valued and empowered. Emerging from the adversarial relationship they’d previously experienced under GM supervisors, they were finally able to bring their full breadth of expertise and skills into their jobs.

This is something we see frequently in organizations with high psychological safety: when people experience mutual trust with supervisors and colleagues, they have the confidence and the freedom to solve problems, to experiment, and to continuously improve..

Trust is the active ingredient that enables sustained high performance.

The NUMMI/GM story isn’t just a story of high performance; it’s a story of employee retention.

After the failure of the GM plants — and its ultimate bankruptcy — folks tried to decipher what went wrong and when they dug deeper, one of the key findings was that there was a tremendous amount of turnover. Whereas, the NUMMI plant enjoyed high levels of employee retention.

This isn’t a surprise — when employees trust each other, and their leaders, when they are empowered to stop and fix, they don’t just perform better, they feel more fulfilled, more challenged, and ultimately far happier at work than those who don’t experience a culture of trust.

Given that it takes on average 3 months to train a new team member — and even longer for that new employee to hit their stride and feel like a real part of the team — this is significant. Particularly now, as leaders and organizations find themselves navigating seismic shifts in the world of work.

Essentially? When you foster trust — and by extension, psychological safety — in your people, you provide the active ingredients needed  to create a high performing organization. Trust is not the only ingredient you’ll need, but without it, little else matters. If given the choice, and employees have a lot of choice, most people will only stay in roles where they experience trust.

So, if trust is the active ingredient in a high performing team leading to improved outcomes like greater effectiveness and higher quality, how do you add those key ingredients to your own organization?

How to build a culture of trust.

First up, forget cheesy trust falls or human knot games (does anyone actually enjoy those?) — the best way to build trust in your team is to do real work together.

Introduce your own version of “stop and fix”.

Learn from the NUMMI success by introducing your own stop and fix practice. What would that look like for your teams?

NUMMI, employees were empowered to stop the line for any reason in order to fix the problem. At a technology startup I worked with, team members were empowered to stop any software release at any point they found defects. Even if that meant the release was delayed. Recently I had oral surgery. About 5 minutes into the appointment, the dental technician realized that the surgeon was looking at the wrong x-rays. The surgeon’s response? It wasn’t defensive. He wasn’t punitive. He looked at me and the dental technician with sincere gratitude that the procedure had been stopped before a major error was made.

Where do you experience quality or effectiveness challenges? When and how might your team members be empowered to stop the line in order to fix a problem? How could you reward that kind of behavior? How could you shine a bright light on the actions of team members that lead to better quality outcomes? Especially when it feels disruptive in the moment?

Stop being a superhero.

When a team member is stuck on a problem, it’s tempting to tell them how to solve it. When something is not meeting expectations, it’s tempting to swoop in and fix it, to be the super hero. This is not the same as “stop and fix.” Every time a leader swoops in to rescue a team member or solve a problem for them, that leader is communicating “I don’t trust you to figure this out”. Stop and fIx is for the team, not management.

Instead, extend trust to the team. Instead of rushing in to provide your expert opinion or give exact direction, get curious. Ask questions and support the team in finding their own solutions, their own direction.

Trust is not the only ingredient needed for a high performing team. But without it, every team will turn out flat, falling short of what they are actually capable of.

Get Real Work, Together sent to your inbox.

Real Work, Together is our monthly newsletter, focused on giving leaders practical tools to focus on outcomes, respond to change, AND get real work done, together.

Real Work, Together subscribers are the first to know about our public workshops and sprints.

You'll also be the first to know when Real Flow: break the burnout cycle and unlock high performance in the new world of work is released, in autumn 2022.