How to recognize and cultivate psychological safety in your organization (and why it’s vital that you do). 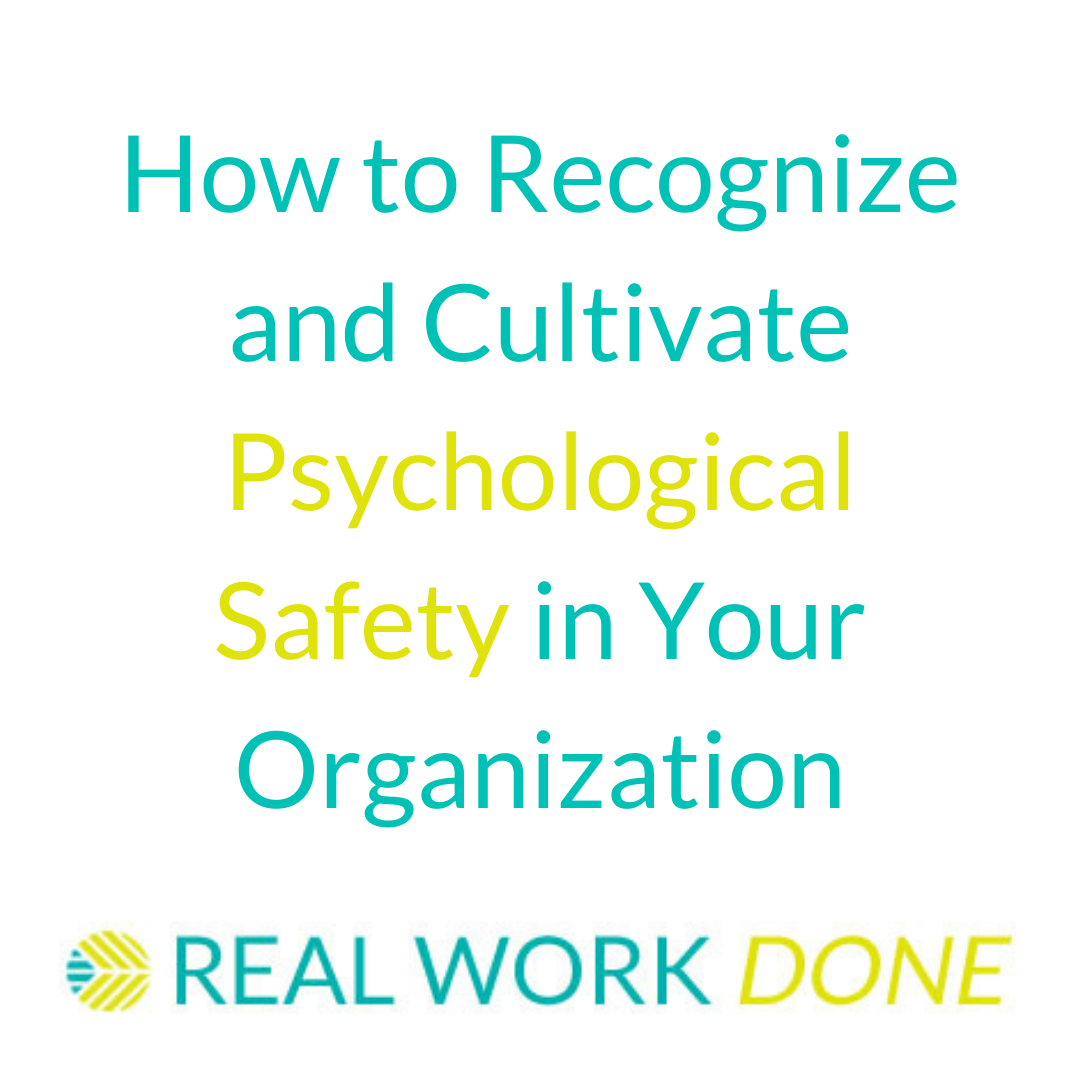 “How can leaders recognize whether their organization cultivates psychological safety?”

I was recently asked this question during a panel discussion, and I was thrilled the topic made its way into the conversation. Because the cultivation of psychological safety — defined by Harvard Business School professor and organizational behavioral scientist, Amy Edmondson as “the belief that one will not be punished or humiliated for speaking up with ideas, questions, concerns, or mistakes” * — has a significant impact on organizational performance and agility.

Yet the answer to the above question is full of nuance.

Because often it’s easier to recognize the absence of psychological safety than its presence.

For example, I once led an organizational and team health check where all of the surveys came back with skyrocketing positive results. Why was that a red flag for me? The leader of this division had engaged me to help with team dynamics because they had been experiencing a high rate of turnover across their dozen teams.

How was it that everything was amazing on the survey, yet weekly people were turning in their resignation letters and teams were struggling to accomplish their goals?

To me, that overwhelmingly positive survey response, in an organization with such a high rate of turnover, was a great gauge of that particular organization’s culture of psychological safety.

What is psychological safety?

Psychological safety isn’t a binary concept. It’s not that your organization either has it or it doesn’t. It’s more of a sliding scale and multiple factors contribute to where your organization lands on that scale.

It was quickly apparent to me that this organization was sitting on the lower end of the spectrum: even on a survey, team members were reluctant to speak up about challenges.

As author Esther Derby says, “psychological safety does not mean that you always feel comfortable. It means that you are comfortable talking about what is uncomfortable.”

Experiencing psychological safety in the workplace is knowing that you’re free to speak out when you need to. When there’s something (or someone) standing in the way of you doing your best work. When you have questions about your organization’s processes or initiatives. When you think you might have screwed up. When the data isn’t lining up with the goals. When you have an idea you want to share.

It’s knowing that you can bring any of this up with your leader and your colleagues without fear of recrimination, ridicule, or punishment.

It’s knowing you can bring your whole self to the table, speak your truth, and be listened to with respect.

And this is vital to your organization’s success.

Because when it’s emotionally and politically expensive to speak up, people will stop doing it.

Why psychological safety in the workplace is so important.

In 2016, Google published the results of Project Aristotle, a two-year study with the objective of discovering what makes a great team.

Based on the research from 180 teams, psychological safety emerged as the most important factor in creating high performing teams.

Fostering an organizational culture in which everyone has the freedom to speak up when it really matters, confers a multitude of benefits.

From a productivity perspective, examining inefficient processes can lead to a more effective outcome or expose a risk while there is still time to act.

Do you want your employees to be striving towards innovation or survival?

People who experience psychological safety in the workplace don’t fear conflict or hard conversations. They’re willing to speak up if someone on the team isn’t a great fit, isn’t contributing, or is actively derailing a project. And they have the confidence to say “no” if they need to do so to protect their boundaries and care for their mental and physical health.

They have the freedom to lean into their creativity. To take calculated risks, to experiment and innovate. And as a result they grow, they learn, and overall are happier in their work.

Recognizing psychological safety in the workplace.

For example, the people in your organization are genuinely thriving.

They’re regularly knocking on your door with fresh ideas.

They’re taking initiative without having to seek approval for every tiny thing.

They are telling you when an initiative isn’t going as well as planned, and letting you know how you can help.

They ask you to resolve competing priorities, and you do.

If that sounds like your organization — excellent. It’s likely that people in your organization, yourself included, experience a foundation of psychological safety that is fueling higher performance.

If not? If your feedback is always resoundingly positive even when you know there is room for improvement? If it feels like your org is treading water? It’s entirely possible that despite your intention and desire to cultivate psychological safety, people aren’t actually experiencing it. But that can definitely change.

Cultivating psychological safety in your organization.

Wherever your organization is on the spectrum, here are three ways to strengthen everyone’s experience of psychological safety:

Success theater is what happens when the only acceptable outcome is success on the first try. And vanity metrics are those that make us look good or feel good — but don’t lead to real insights about our progress.

And neither are conducive to the cultivation of psychological safety.

So yes, celebrate those wins and successes, but acknowledge that a failed first attempt whose lesson brings you closer to your desired outcome most definitely falls into the “win” category.

Make this explicit: talk with your team about the types of vulnerable behaviors that will lead to success. For example, asking questions, remaining curious, and giving and receiving feedback.

Ensure your managers and employees know that you expect them to hold each other accountable to reward vulnerability.

And remember: as a leader, it starts with you.

Too many organizations only have the appearance of psychological safety. People are encouraged to give honest feedback, yet something — perhaps past experience or the leader’s tone and body language — suggests that it’s not safe for them to do so.

Avoid this pitfall by modeling vulnerability.

One CEO I know does this extremely well. He created a Slack channel entitled I made a mistake, where people can freely, and without judgment, share their mistakes and the lessons they learned in the process.

And the CEO? He’s one of the most regular contributors to the channel!

When you create a culture in which people are actively rewarded for their vulnerability, it taps into something very human about us, unlocking creativity, potential, and performance opportunities that aren’t available when we are merely trying to survive.

Take your first step towards that by modeling vulnerability in a 1:1 or with your entire team sometime this week.

Get Real Work, Together sent to your inbox.

Real Work, Together is our monthly newsletter, focused on giving leaders practical tools to focus on outcomes, respond to change, AND get real work done, together.

Real Work, Together subscribers are the first to know about our public workshops and sprints.

You'll also be the first to know when Real Flow: break the burnout cycle and unlock high performance in the new world of work is released, in autumn 2022.