During a recent live podcast discussion, my client had a confession for me:

Her organization was in the process of shifting to a 4-day work week and the mood of the team wasn’t what she was initially expecting.

Sure, there was a little excitement over the thought of having every Friday afternoon off but several team members were actually nervous, even hesitant.

Because despite the increasing body of scientific research pointing to the effectiveness of a 4-day week, it’s a concept that feels counterintuitive. We’re steeped in the belief that being a high-performer means doing more, doing everything, and doing it all at once.

We wear the label of “multitasker” as a badge of honor.

We’ve spent decades glorifying the maximization of work and developing “best practices” to help us work harder, put in more hours, and squeeze every last possible drop of effort from our teams.

If you relate to feeling this way, there is no shame in admitting that you have this mindset. In fact, realizing that you’re being influenced by hustle culture and the grind myth is step one in recognizing the truth. Namely:

The fundamental premise of maximizing work is deeply flawed.

Because success doesn’t lie in maximizing work — it’s about maximizing outcomes, and to do that, we’re going to have to undo the cultural illusion about work and simplicity.

Culturally, we respect hard work. If we’re getting great results without the feeling that we — or our teams — are grinding or hustling we feel like we’re cheating the system. Conversely, when we experience complete exhaustion at the end of the working day, we equate that with results or success. The equation feels simple: more work = more results.

I call it the Treading Water Illusion. 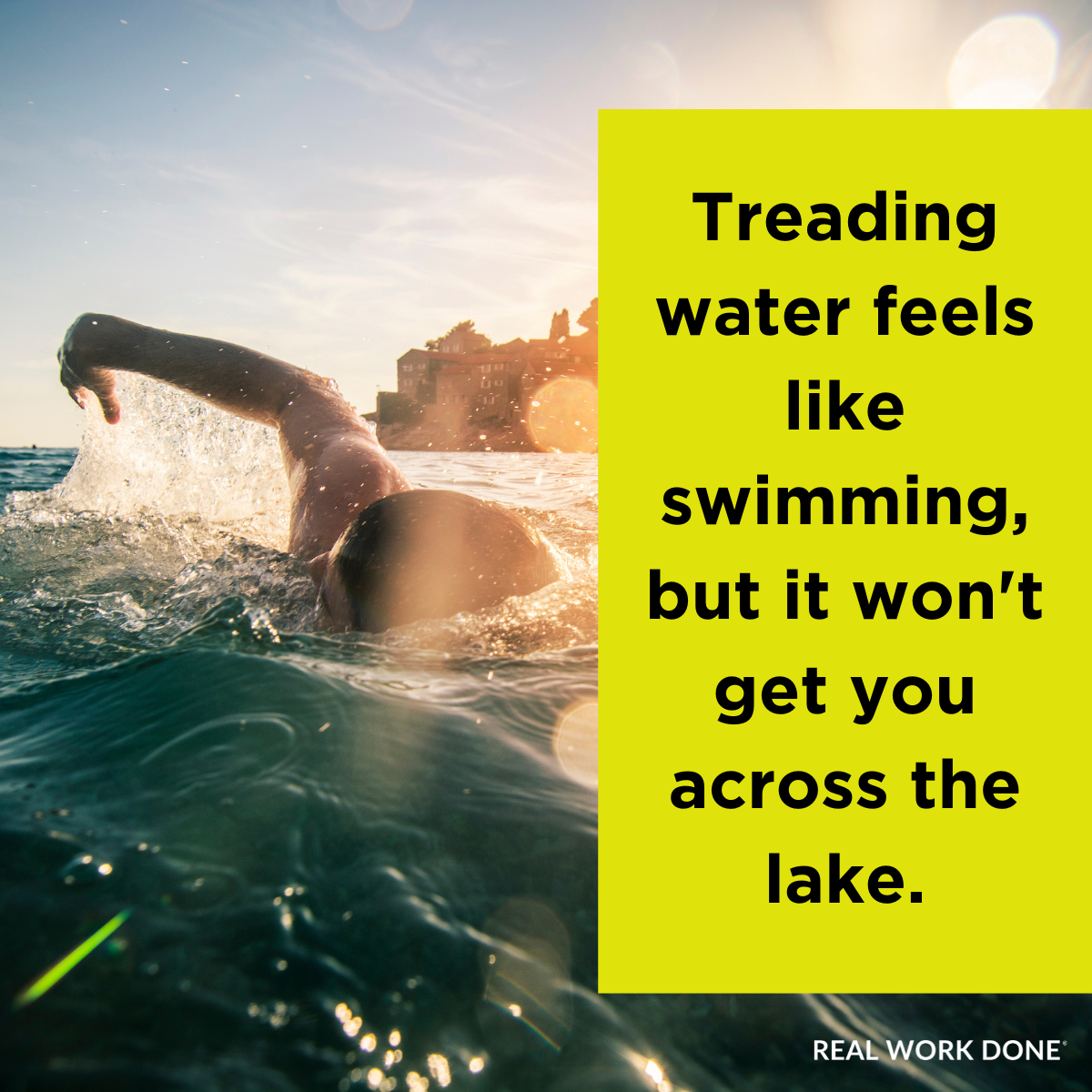 Treading water requires vast amounts of energy and effort — but what’s the result? You’re exhausted yet barely keeping your head above the water line. For less effort, for fewer calories burned, you could have swum across the entire lake.

So how might you put that new equation into practice? How can you shake off the unrealistic and ineffective demands of hustle culture? What could actual simplicity look like in your organization? How do you stop treading water and start swimming?

Maximizing the work you don’t do.

In the Agile Manifesto for Software Development, simplicity is defined as “maximizing the work not done.” It lies in understanding the desired outcome, asking yourself: what’s the minimum, easiest way I could solve the problem … and then stopping before you do more.

If you want to transform your organization, it pays to be highly disciplined — ruthless even — when it comes to identifying and eliminating the tasks and the effort that aren’t adding value.

A few years ago I was watching the Summer Olympics when something struck me about the relay race.

You possibly know that the relay race involves a team of four runners, who have to take turns running around a track, passing a baton from one runner to another at the right time. The team who wins the race isn’t necessarily the one with the fastest runners or the one with the runners who can run the hardest. It’s simply the team who gets the baton across the finish line first.

So here’s what I noticed while I was watching them compete: when it wasn’t their turn to run, the team members were just standing around waiting.

And it made me think about the conversations I’d been hearing recently about capacity management and the questions leaders were asking about whether they’re getting enough out of people for the time that they’re putting into their work. Conversations about what we could do to the work environment to help people do more with their time.

If these folks were in charge of the relay team, they’d be thinking about how to get more from those runners who were just “waiting around”. Maybe they’d be getting them to fit in a few squats, or practice for the discus throw.

But the relay team coach is 100% focused on getting that baton across the finish line — they would never dream of compromising the outcome of moving the baton from one runner to another by having some of the team take part in a different event, or risking fatigue in the name of keeping busy. The cost would be too great.

What would it look like if we adopted that mindset in our organizations?

Instead of seeing time as a vacuum that needs to be filled, what might it look like if we approached, for example, the idea of a 4-day week with the idea that having your people coming back on a Monday morning refreshed and ready to go is a direct result of the work they didn’t do on Friday? Or the direct result of what they did instead of working on Friday?

What would our outcomes look like if we allowed people to embrace strategic inaction (aka simplicity) instead of maximum activity?

That’s what my client did. They stopped the extra activity on Fridays. Strategic inaction. The result? They have less activity, but they are getting better results — for their customers, and for their team.

What can you do to maximize simplicity? Here’s two questions that will help you figure it out.

1. What’s your baton? What is the actual value that needs to get over the finish line? Make sure you know what that is. Make sure everyone else on the team knows too.

What activity makes you feel productive, but is actually diminishing your performance?