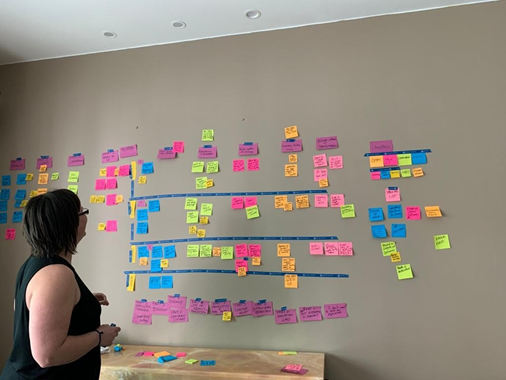 “We had record breakthroughs in operational efficiency last year, but our client complaints went up.” Margaret, director of client services at a workforce training center, went on to tell me that the chair of the board was thrilled with the cost savings while still being able to serve more clients. “I think we are missing the point,” she sighed.

Margaret’s not wrong. There is an invisible and powerful cultural message that more with less is always better and that productivity is a goal unto itself. This is the Productivity Trap. The Productivity Trap mindset was at work in Margaret’s company and the costs were growing, but none of it was showing up on the quarterly balance sheet.

Edward Deming called these kinds of costs “heavy losses.” They are hard to evaluate and measure, but devastating all the same to the good work we are trying to do and the people at the center of it.

As an organizational designer and agile coach, I teach this, consult on it, and even write about it. And I still get sucked into the Big Productivity trap (you know, that productivity industrial complex peddling products and advice that only benefit the companies selling productivity).

In February of 2020,  I was at the beach, on a writing retreat—with a wall full of sticky notes—my total happy place.

I created a sprint week because I knew I would need focus to do the work. It was fantastic. I had momentum, I was on track to wrap up my book that spring. I was productive in all the right ways.

I came home to a global pandemic spreading in the US. Within two weeks, my community was in crisis, my kids were home from school, and I had to temporarily shutter our family business. At the same time, my clients needed me more than ever, and I was rapidly learning new skills as a virtual speaker and facilitator so I could keep my consulting practice up and running.

And I was still trying to get up and write for the first few hours every day.

I added a healthy dose of regret and guilt onto everything else because I wasn’t making progress on my book. I *knew* that there were good reasons I wasn’t making the progress I had hoped for. But still, I suspected that if I were a true high performer, I could figure it out; that if I cared enough it wouldn’t be so hard.

I was disconnecting my measures of productivity from the outcomes I was after. Let me say that again for everyone in the back of the room.

Productivity without outcomes is a trap.

I had an abundance of priorities—all real, all important, all immediate. I had even done the hard work of rank prioritizing—book writing landed about #5 on my list, and I was still beating myself up for not being productive enough. In reality, I had taken my one whole human self and attempted to divide my time among the eleventy-eight things that needed my full attention. In my plan, book writing was one of five top priorities. On my calendar, it had about 20% of my time. In reality, the writing was getting approximately 0% of my brain space—except for the brain space where I was feeling guilty about not getting more done on my book.

I was expending ALL of my energy, time, and resources. Big Productivity would like me to believe that if I am using all of my energy getting items on my task list done, I am highly productive. But even though I was checking off my writing time every day, I wasn’t moving forward.

The Big Productivity almost had me. The thinking goes, if I can’t make progress on my book every day, I am not being productive enough. But my actual goal isn’t to make progress every single day. My real goal—the real outcome I was after—is to meet my deadlines so that I can publish on time. Publishing the book should be my real measure of productivity.

Effective productivity has to be connected to measures of success, and measures of success are highly contextual. I have a friend who’s goal is to write every single day. She is working on building a writing habit. I am not interested in a writing habit; I am interested in getting my book out into the world, and daily writing time isn’t going to get me there—not in 2020. I need writing sprints.

So, I am on another writing retreat. A 3-day sprint this time. All alone, out in a Minnesota prairie. I’m measuring productivity not by how many hours I write, but by how many chapters I revise. It took me most of the first day just to unwind my mind, and I had to fight the Big Productivity message that I was wasteful and unproductive with my time. In reality? I’ve accomplished my goal before the sprint was even close to being over.

What do you know? With singular focus and a clear outcome—I’ve been amazingly productive. I’ve accomplished more in the last 2.5 days on my book than I have in the last 3 months. And nothing has fundamentally changed about my priorities. There is still a global pandemic, my kids are still out of school, my world is still a roller coaster of uncertainty. But I am practicing the principles I teach—outcome-driven productivity and focus.

This book is being written a sprint at a time. I don’t measure productivity by hours of writing, but by micro-outcomes—in this case, chapters done. Because every chapter done gets me closer to my goal of publishing. And the real, most important measure of productivity will be based on the outcomes after the book is published.

The shift to outcome-driven productivity is simple, but it’s not easy.

It requires a relentless commitment to real work that matters and a keen awareness of the specious ways Big Productivity infiltrates our mindset. The question that guides me forward every time is “How will we know it’s time to celebrate?”

I asked this question as I was sorting through how to measure my writing progress until I landed at an answer that was worthy of celebrating. Would I celebrate merely because I was adding hours to my writing log? Nope. What about getting as much done as possible during my writing retreat? That sounds great, but it’s too vague. How much is “as much done as possible?”  Would I celebrate my completion of three chapters on my retreat? Yes, that would get me closer to my real goal! And I knew exactly when to open the bottle of wine. I can only measure my progress and productivity in the context of a clear outcome.

This question is equally as powerful for leaders and teams trying to figure out their own outcomes.

Recently, I worked with a retail executive who was moving forward a strategic goal to process vendor payments more quickly. There were four product teams working on this effort, and it wasn’t going well. The initiative was behind schedule, the teams were overworked, and the sponsor was frustrated.  The executive wanted me to help this product group be more effective. When I arrived on the scene, the stated goal was to process payments faster. I talked with members of every team, and they each had a different interpretation of the success criteria. FASTER was all anyone agreed on.

“How will the teams know when to celebrate meeting this goal of yours?” I asked the leader. That wasn’t a question he was used to answering, but it was exactly the question he needed to answer first.

Up to this point, the entire goal was to move faster. FASTER is nice, but that wasn’t giving anyone what they needed to plan and measure progress. One design and planning session later, the leader and teams agreed that the outcome they were after was to process 90% of vendor payments in less than 10 days with zero errors. When can this group celebrate that they met this mission-critical goal? When the product enabled 90% of vendor payments to be processed in 10 days with zero errors. Now everyone had what they needed to have to measure progress and productivity.

Real productivity and progress can only be measured in the context of a clear outcome.

Identify a priority that you are working on.

What is the outcome you are aiming for?

How will you know when it’s time to celebrate?

Get specific on your answers to these two questions and change the conversation with your team about progress and productivity.

Get Real Work Shared to your inbox.

Real Work Shared is our monthly newsletter, focused on giving leaders practical tools to focus on outcomes, respond to change, AND get real work done, together.

Real Work Shared subscribers are the first to know about our public workshops and sprints.

You'll also be the first to know when the REAL WORK DONE book is released, in early 2021.